AKA and Cassper Nyovest end beef at the Celebrity Games (Video) 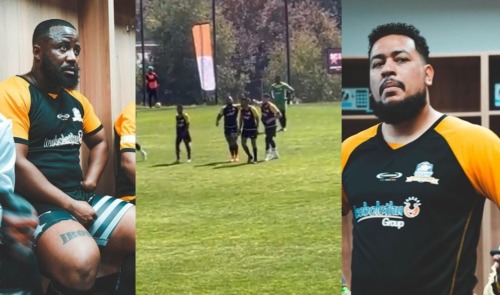 Cassper Nyovest and AKA prove to have ended their long-time beef during a football match that took place this Sunday.

Big Zulu organized a match that involved the different music genres in SA; the aforementioned rappers were available to play for Hip Hop with Cassper scoring a goal.

In a video that surfaced on the internet, Mufasa and Supa Mega were seen giving each other a high-five.

Over the years, one of the two usually avoids the game but seeing that they were both present at the match and they went as far as being friendly suggests that the beef of over three years has finally come to end.

Cassper Nyovest and AKA at the Celebrity Soccer Games. pic.twitter.com/pJxOfsLt9C

AKA kicking ball with Cassper Nyovest at the Celebrity Soccer Games. pic.twitter.com/EKbXJkKk6l

It’s interesting to see that the numbers on their jerseys are 6 and 7; check out reactions below:

and they’ll continue fooling us