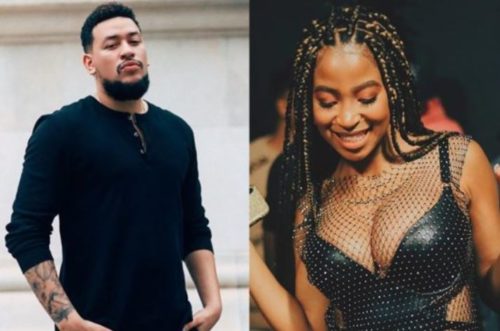 AKA says he removed himself from the situation after his late wife, Anele Nelli Tembe threatened him by saying she will jump off the hotel they lodged in Cape Town.

Supa Mega finally spilled out the all that happened before Nelli’s death on the 11th of April, and how he first reacted after she jumped to her death.

From the interview premiered on The BarLeader TV official YouTube page; the rapper said himself and Anele had always had issues in their relationship; from his explanation, it looked like their relationship was never problem-free.

Nelli was always with the rapper for most of his shows, and on the 10th of April, the two lodged in a hotel alongside some friends. After friends departed the couple, Supa Mega said he brought up talks about the conflict they had a week before then in other to get it resolved.

However, in the process of making peace, they got into another heated argument and Nelli threatened to jump off the balcony.

AKA said he tried to avoid the situation, but he reached out to the reception for security; afterwards, he went to the toilet.

Returning to the room, Nelli was no where to be found, he stepped out to the balcony and behold, she had already jumped from the 10th floor.

AKA said he saw her in a critical state from up and believed she won’t survive it, despite hoping she could survive it.

Supa Mega said he repeatedly said, “Oh my God,” and headed to the next room where his friend lodged.

He told his friend what had happened, and he was urged to remain upstairs.

The rapper said the first news he got was that she was alive, but few minutes later, his friend came back again , revealing that she has passed on.

The Jika hitmaker made it known that he is still mourning her, and refused to dish out some details because he’s protecting the young girl’s memories.