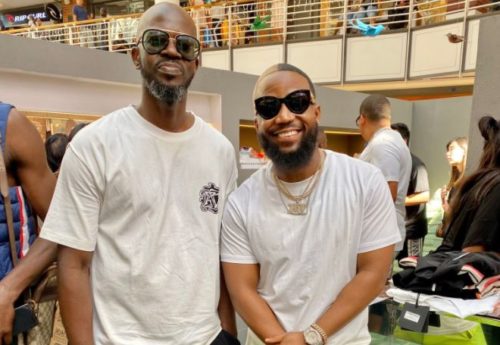 Black Coffee and Cassper Nyovest are getting more fond of each other and social media users can’t keep calm.

We don’t know what’s going on behind the curtains as regards their relationship, but from what’s being observed on social media, the two have a lit thing going on between them.

Mufasa retweeted a Tweep’s post which himself alongside the international DJ were tagged.

The post reveals how Drake appreciated Black Coffee over an item he received.

A social media users screenshot the IG story and shared on Twitter.

Upon sighting it, the rapper retweeted and a short conversation kicked off.

Lots of tweeps spotted the DJ’s use of Cass’ adlib on Cotton Egyptian single off AMN album during the conversation.

Fans felt the bond between them and appreciated the bromance, as the two now have an habit of reaching out to each-other, most especially on Twitter.

Can we get a Black Coffee x Cassper Nyovest collab asseblief?

Yithi meaning “It’s Us” but then Who Am I to read that Correctly!!?😅😅🤣🤣 pic.twitter.com/kQNJhJ9xGA

They say surround yourself with greats, I do it frequently (Facts) pic.twitter.com/sfwLZh0CKw