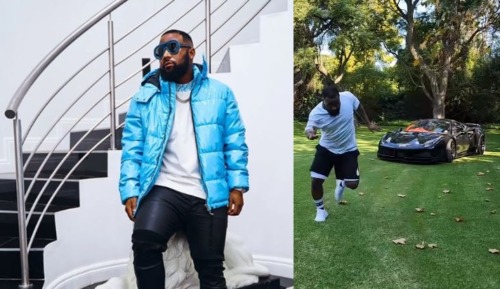 Cassper Nyovest got fans curious after sharing a video of himself dancing in front of a black luxurious car, a Ferrari.

The rapper was rumored to have bought himself a new car last week and he’s responded to the rumors with a new video that was shared on social media.

Cassper has been intentional in promoting the Diamond Walk song he did with Abidoza and DJ Sumbody by creating a dance for it.

In another dance video shared, a black Ferrari was behind him and it raised brows as many know Cass to be a fan of white whips, not black.

Some netizens responded by saying it’s a hired car, while another said it’s for his son Khotso.

However, Mufasa is still mute about the car talk.

Check out the video below: