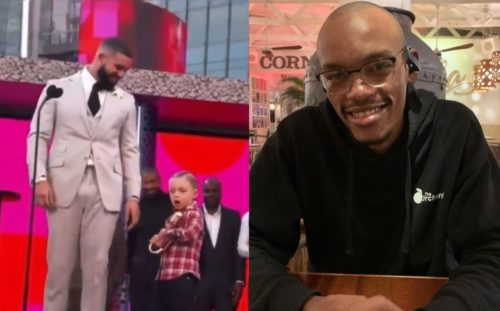 American rapper Drake, who just bagged Artist of the Decade award at the Billboard Music Award with his son, Adonis got dragged by SA Critic named Nota Baloyi.

At the event, the rapper walked to the stage with his son to accept the award.

However, Nota spotted a deadbeat dad and child abuser in the rapper, and called out higher authorities to cancel the star.

Drake was seen struggling to carry is son, who seem not in the mood, and this is what the SA critic had to say:

“This is child abuse… What’s wrong with people. This is what fame does to you? Using your own children as pawns!”

This is child abuse… What’s wrong with people. This is what fame does to you? Using your own children as pawns! https://t.co/F91PUdNG2V

“Drake is using his son for clout… These rappers use their kids for sympathy all while living with the crew in a mansion that’s not child friendly and in an environment where strange adults are living off of his father. Even the world’s biggest rapper is a philandering deadbeat!” Nota added.

I can’t believe we just watched a child being tormented and paraded in front of a crowd against his will and saw nothing wrong… Where was Adonis’ mother? Why would would Drake think it was okay to use his child as a prop? Why did none of his crew tell him that this was wrong?

Kids get raped by their uncles then blame themselves because the world turns a blind eye until there’s a dead body… This is why so many grown women self harm today because the world watched them get abused and turned a blind eye. The billboard music awards isn’t child friendly!