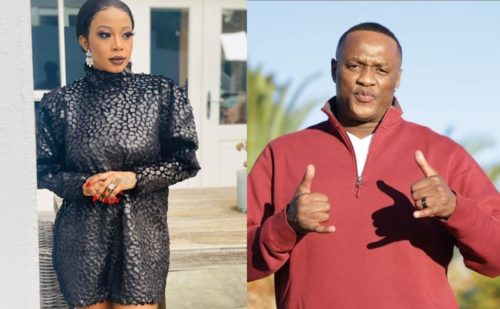 Kelly Khumalo says she’s washed her hands off trying to make Jub Jub a responsible father to their son, Christian, as he’s not making any effort, despite calling him out publicly.

On a new episode of her reality show, Life With Kelly Khumalo, the singer opened up about Jub Jub to her friend.

Despite reaching out to him, the singer reportedly revealed that she’s not gotten a call from Jub’s side.

“I’ve tried and when Christian gets older he will know. I mean his old enough to remember that I did mention certain things with him because I was trying to make an effort for him to have a father in his life.  I am washing my hands. I have had enough. This whole father thing is an issue. Christian’s father is not making an effort. My father is also not making an effort,” added Kelly. “Also with my dad. Everything is fizzled out. And, I’m at the point where I’m like – it’s right now. I don’t care anymore,” she said.

Meanwhile, the two got dramatic during Christian’s birthday as they both celebrated his birthday on different dates.

The public got controversial about it, as some questioned Jub for not knowing his son’s birthday, believing Kelly is the mother and she’s got the correct date.