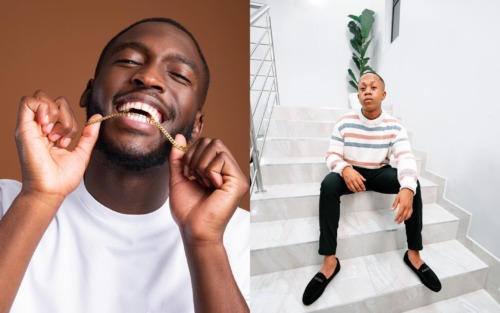 Amapiano vocalists, Young Stunna and Daliwonga are currently on their way to more fortune in the industry.

Surprisingly, both artists are under Scorpion Kings. Young Stunna is currently signed to Kabza De Small while Daliwonga is signed to DJ Maphorisa.

The contest of who raised a better follower has been a question in the industry over time. Young Stunna and Daliwonga have both been on top of the charts before individually, they’ve featured on hit songs, they’ve released hit songs, as the line becomes thinner between them.

Daliwonga has been in the game before Young Stunna. Daliwonga Matiwane was signed under Maphorisa’s Blaqboy Records in 2020 which makes it a year earlier than Young Stunna at PianoHub.

Young Stunna’s consistency in the game has put him forward in the industry and makes him a good follower.

The question still remains, who would you put your money on?

Upon his involvement in the industry, Kabza’s signee went straight to release the chart-breaking track with Kabza De Small on Adiwele.

Some of his top recognized songs in the industry are;

2. His vocals on Bambelela with DBN Gogo, Felo Le Tee, and Pabi Cooper.

Lawd Phori’s signee is on his way to having one of his biggest hits as he dropped Abo Mvelo on M.J, Mellow, and Sleazy.

Some of his top appearances in the industry are;

In working with Major League DJz also, Daliwonga took a Balcony mix with them on S3 EP4.

He’s one of the few Amapiano vocalists that also worked with Riky on the Cotton Fest’s live performance. So far, Daliwonga has delivered just an album titled Chameleon.

Meanwhile, Young Stunna and Daliwonga also showed their vocal strengths together on Bayeke.

The Amapiano vocalists have shown improvement over time and definitely still on the verve of greater things. But the question still remains, who would you put your money on? Kabza’s artist or Maphorisa’s artist.